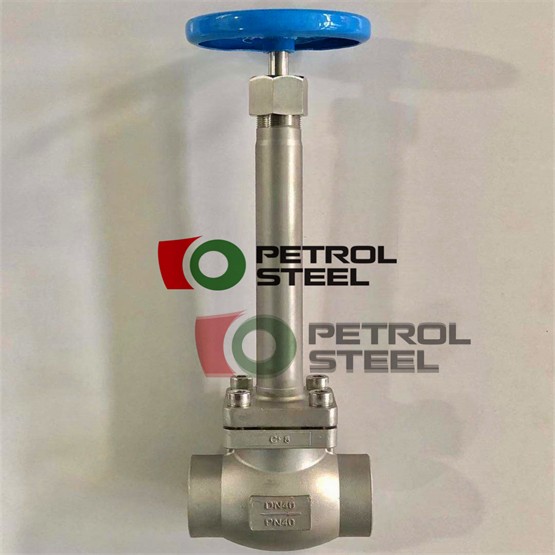 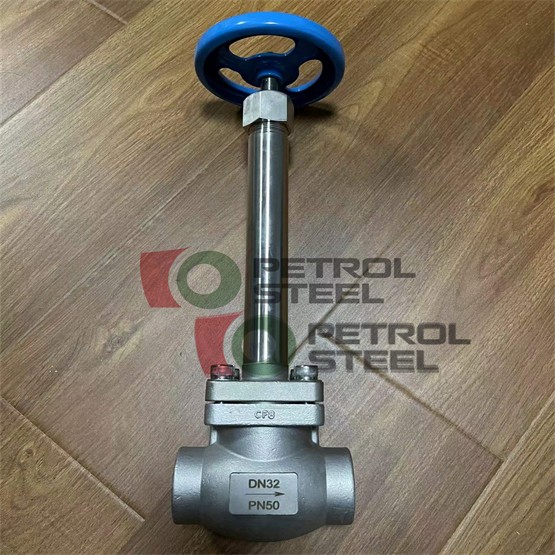 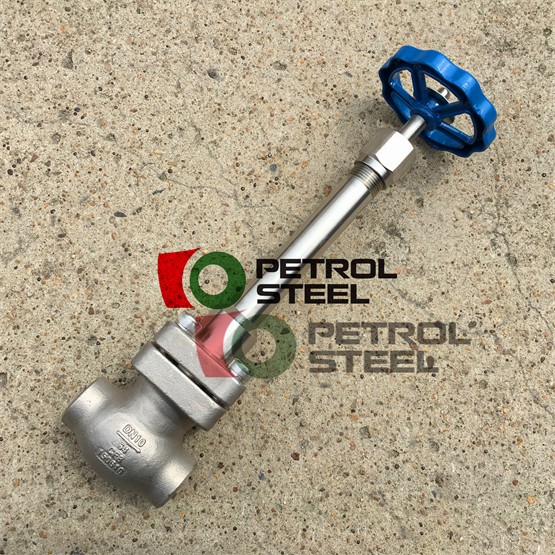 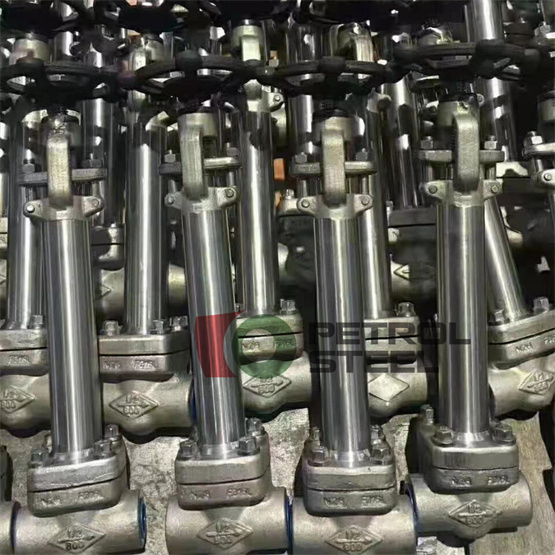 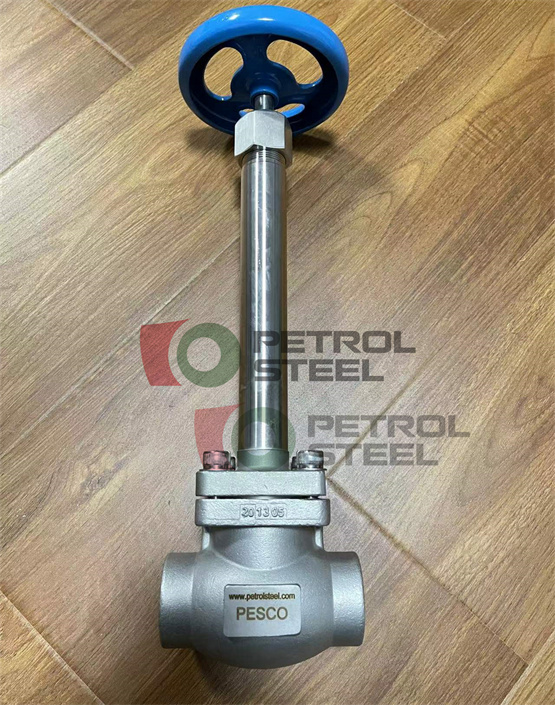 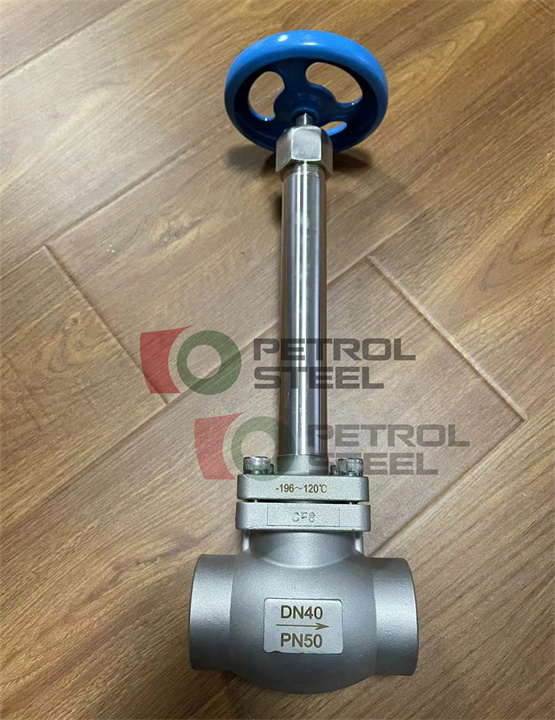 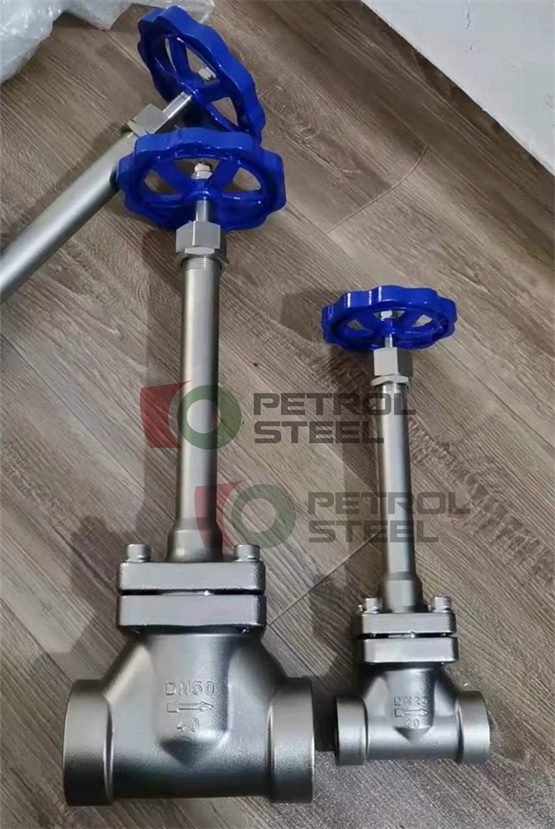 PETROL STEEL CO.,LTD always adheres to the quality policy of "all for the user", abides by the corporate philosophy of "customer-centered, quality-based survival, technology-based development". The service tenet of "Excellence, Integrity, Integrity and Week", PESCO -196 Celsius degree Cryogenic Globe Valves are committed to becoming one of the most professional cryogenic valve suppliers in China, providing customers with higher quality products, more competitive prices, and faster and more complete services. Continuously improve the quality of products, we are willing to work with users, relying on our honest labor, to carry out extensive and various forms of sincere cooperation to create a brilliant tomorrow for cryogenic valves. 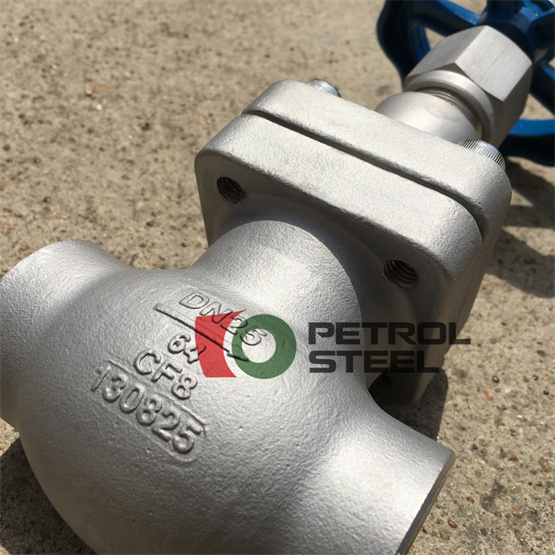 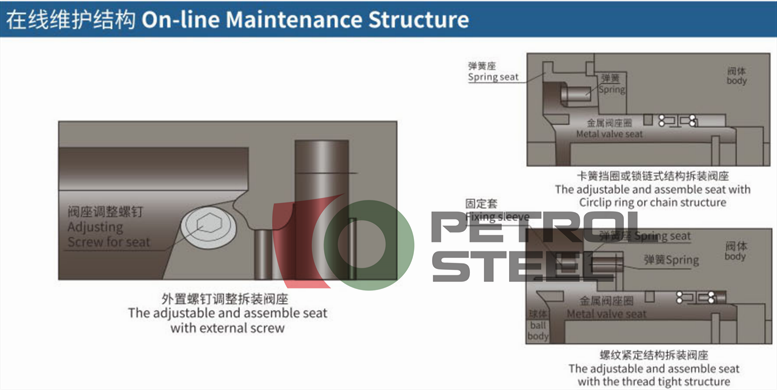 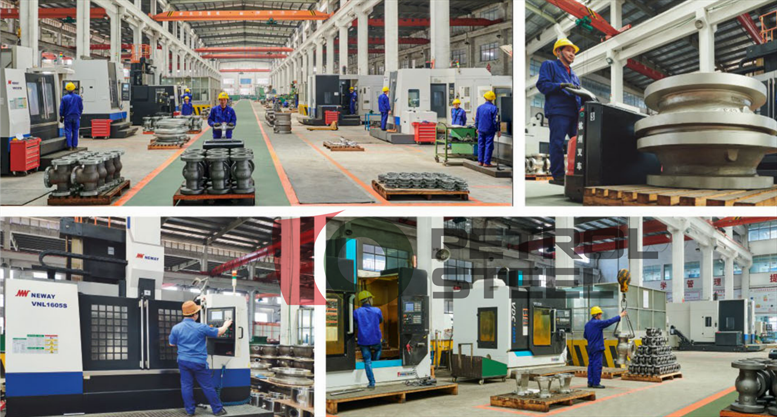 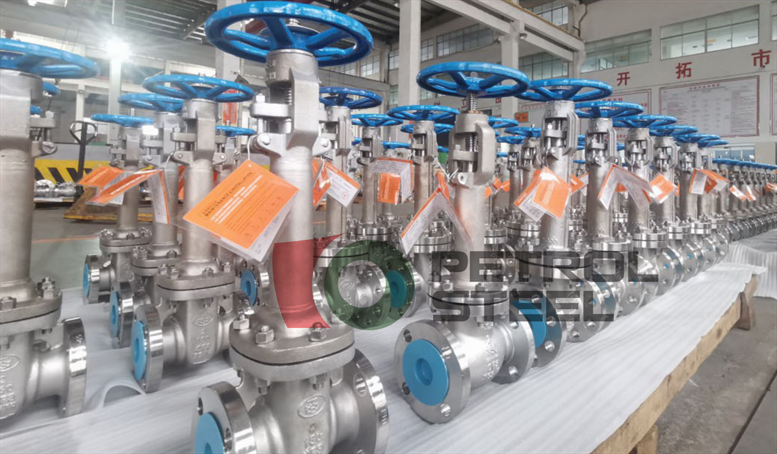 2. Structural design of petrochemical PETROL STEEL CO.,LTD's cryogenic valves
1) Bonnet structure design
A notable feature of -196 Celsius degree Cryogenic Globe Valves is that the bonnet is generally a long-neck structure, and it is also clearly stipulated in GB/T24925 "Technical Conditions for Cryogenic Valves" that "the bonnet of cryogenic gate valves, globe valves, ball valves and butterfly valves should be used according to different applications. The temperature requirements are designed to be a long-neck bonnet structure that is convenient for cold insulation, so as to ensure that the temperature at the bottom of the stuffing box is kept above 0°C.” The design of the extended bonnet structure is mainly to keep the valve operating handle and the stuffing box structure away from the low temperature area, which can not only avoid the frostbite of the operator caused by the temperature too low, but also ensure that the stuffing box and the gland are used at normal temperature to prevent the packing.

Taking into account comprehensively, SHELL MESC SPE 77/200 has a wide range of extended lengths, which is more convenient and reliable to use. If it is used in low-temperature critical occasions, it can be designed with reference to the SHELL MESC SPE 77/200 standard or according to the special length requirements of the design unit. In addition, when selecting the length, it is also necessary to consider whether the thickness of the designed cold insulation layer is greater than the length, if so, it should be lengthened to match the thickness of the cold insulation.

2) Structural design of drip board
Since the transmission in the valve is a low temperature medium, in order to avoid or reduce the transmission of the medium temperature to the filling material at the valve stem and its upper end, and prevent these materials from failing due to freezing, a drip plate structure can be added to the -196 Celsius degree Cryogenic Globe Valves. Some research institutions have carried out experimental verification on the valve with the drip plate structure, and proved that the upper end of the valve cover with the drip plate has a higher temperature. Due to the low temperature of the upper part of the extended valve cover, the valve is usually exposed to the air, and the water vapor in the air will liquefy into water droplets when it encounters the low temperature valve cover. The diameter of the drip plate exceeds the diameter of the middle flange, which can prevent low temperature liquefaction. Water vapor drips on the middle flange bolts to avoid bolt rust from affecting online maintenance. In addition, the drip plate needs to be set on the outside of the cold insulation layer, which can prevent the condensed water droplets from falling on the cold insulation layer and the upper part of the valve body, protect the cold insulation layer and prevent the loss of cooling capacity. 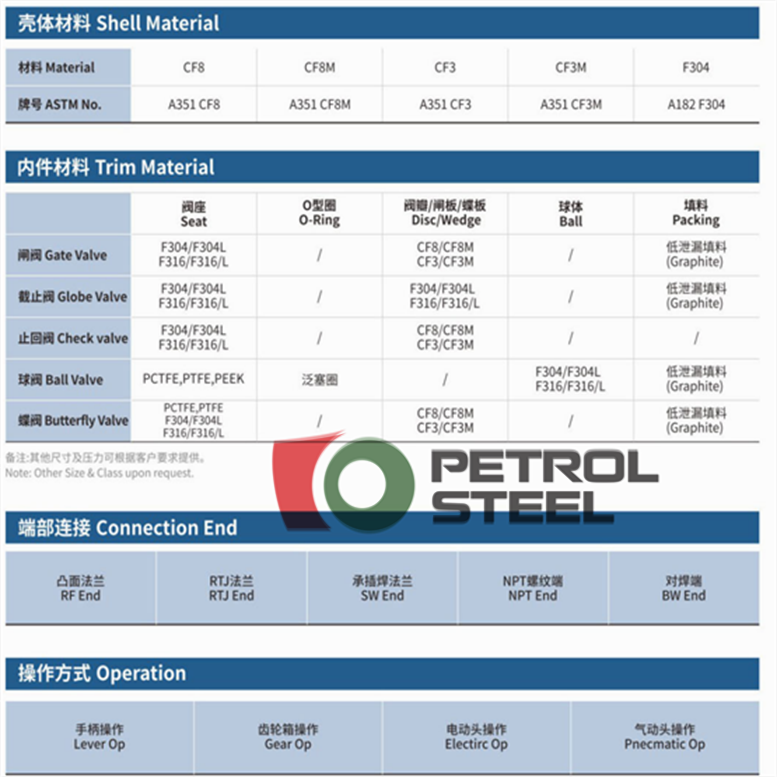 3) Structural design of pressure relief components
For -196 Celsius degree Cryogenic Globe Valves with a closed cavity structure, when used in flammable, explosive and easily vaporized media, there are special requirements for the valve sealing structure. Some low-temperature media will increase in volume after vaporization. For example, the volume of liquefied natural gas after vaporization is more than 600 times that of the liquid state. When the valve is closed and the ambient temperature is relatively high, the low-temperature medium in the valve body absorbs the environment. It is gradually vaporized by medium heat, and its volume rises rapidly, resulting in overpressure inside the valve, even threatening the safety of the valve, causing medium leakage or even a fire accident. The pressure structure enables automatic relief when the pressure in the inner cavity of the valve is abnormally overpressured. Such as low temperature gate valve and ball valve, due to different valve sealing principles, there will be obvious differences in pressure relief design. However, different manufacturers have their own different characteristics in the design of the pressure relief structure. 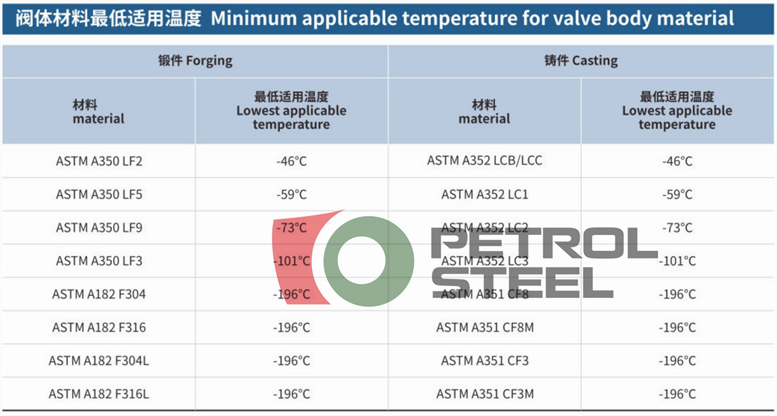 4) Anti-static and fireproof structure design
Since -196 Celsius degree Cryogenic Globe Valves are generally used in flammable and explosive media, anti-static design and fire protection design are particularly important. The anti-static design mainly uses a current-guiding method similar to a lightning rod to conduct the valve stem and the valve body, so as to export static electricity to eliminate potential safety hazards and ensure the supply safety of the entire system. For example, GB/T24925 clearly stipulates that "for valves with soft valve seats or soft closing inserts used for flammable vapors or liquids, the design should ensure that the valve body and valve stem have electrical continuity, and the large resistance of the discharge path should not exceed 10Ω.”. The design of the fireproof structure is mainly carried out for the problem of medium leakage caused by drastic temperature changes. The design of the fireproof structure is similar to the design requirements of ordinary valves. 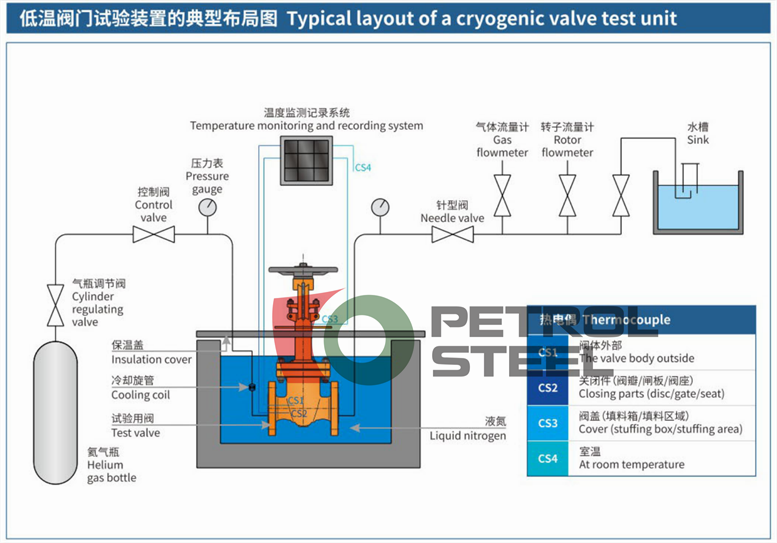 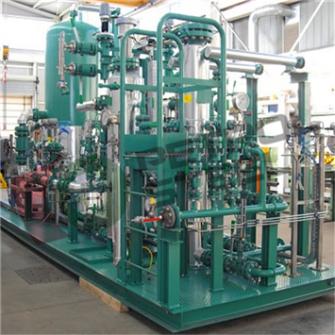 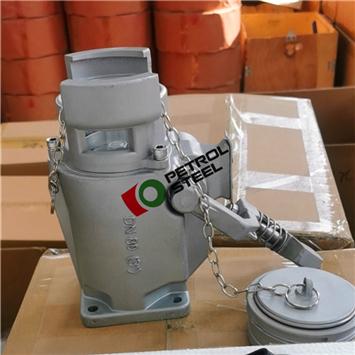 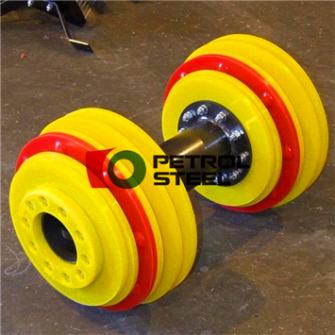 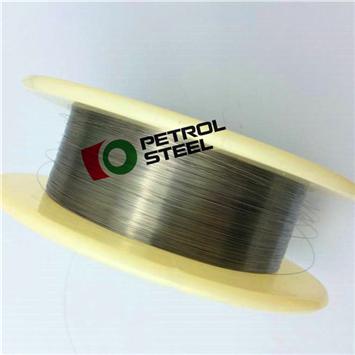 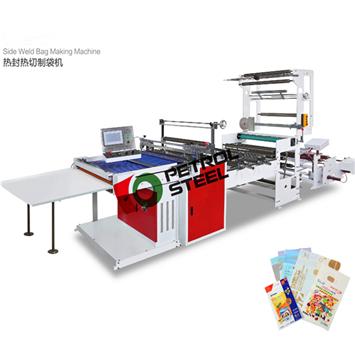